Michael Mann’s films have strong visual aesthetics. Like many filmmakers, one of the ways he conveys mood and meaning is through his use of color which is particularly striking. Here’s an interpretation of it.

In Thief, the office walls of Frank’s car dealership are gray, as are the walls of the prison visiting room where he visits Okla. 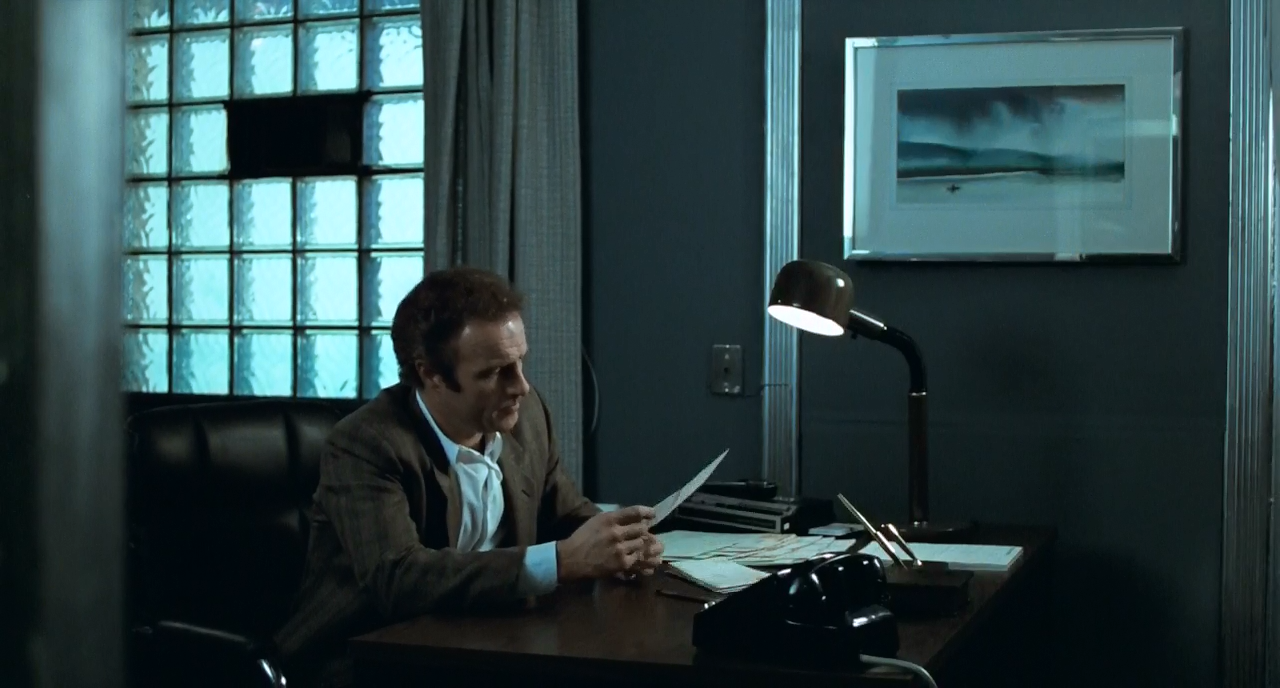 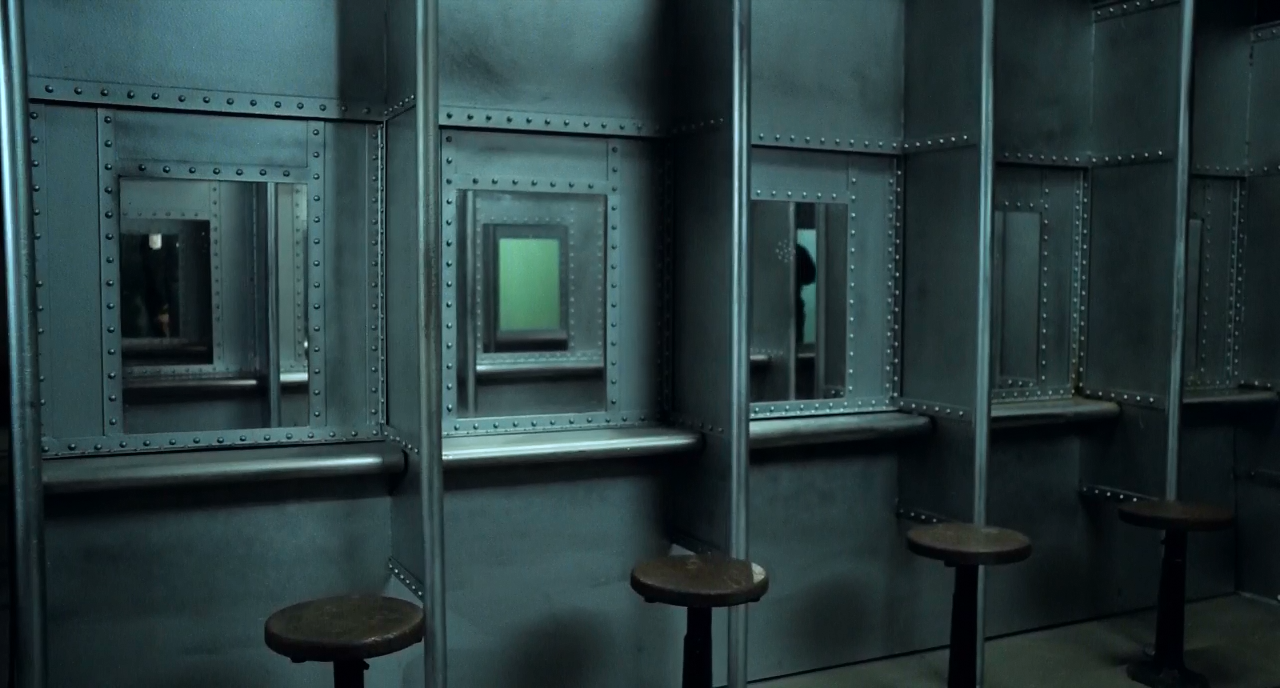 When Frank and Jessie go to an adoption agency , the clerk who denies them is framed with white lights behind her. 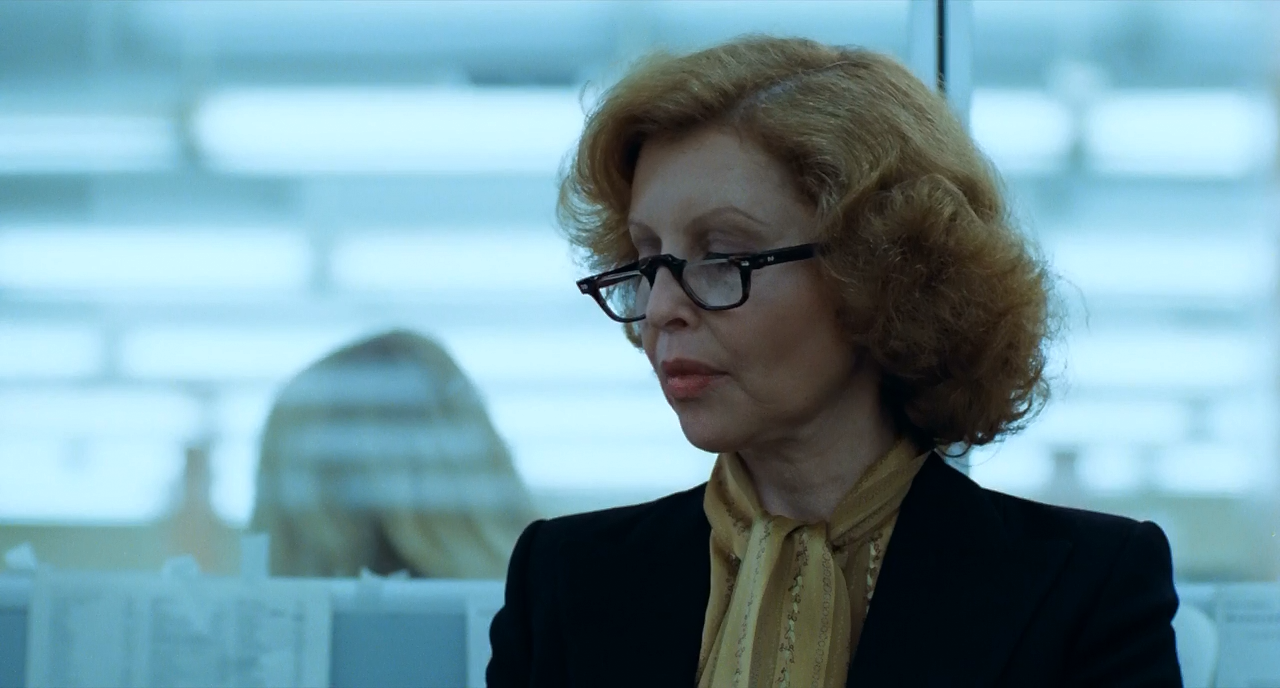 The houses of the victims killed by Dollarhyde, bland upper middle-class suburban families, are white with gray exterior.

The interior of Neil’s condo in Heat is white and gray, highlighting the emptiness and sterility which Neil maintains in order to pursue his criminal activities without compromising his identity.

After the bank robbery, Chris has a new haircut, fake ID and drives a white car in order to go incognito.

While Neil is driving to the airport with Eady, he goes through a tunnel with bright white lights. He is about to leave his criminal life behind and assimilate into society.

Both Neil in Heat and Vincent in Collateral wear gray suits with white shirts to be anonymous, so that potential witnesses would have a hard time describing them to the police. 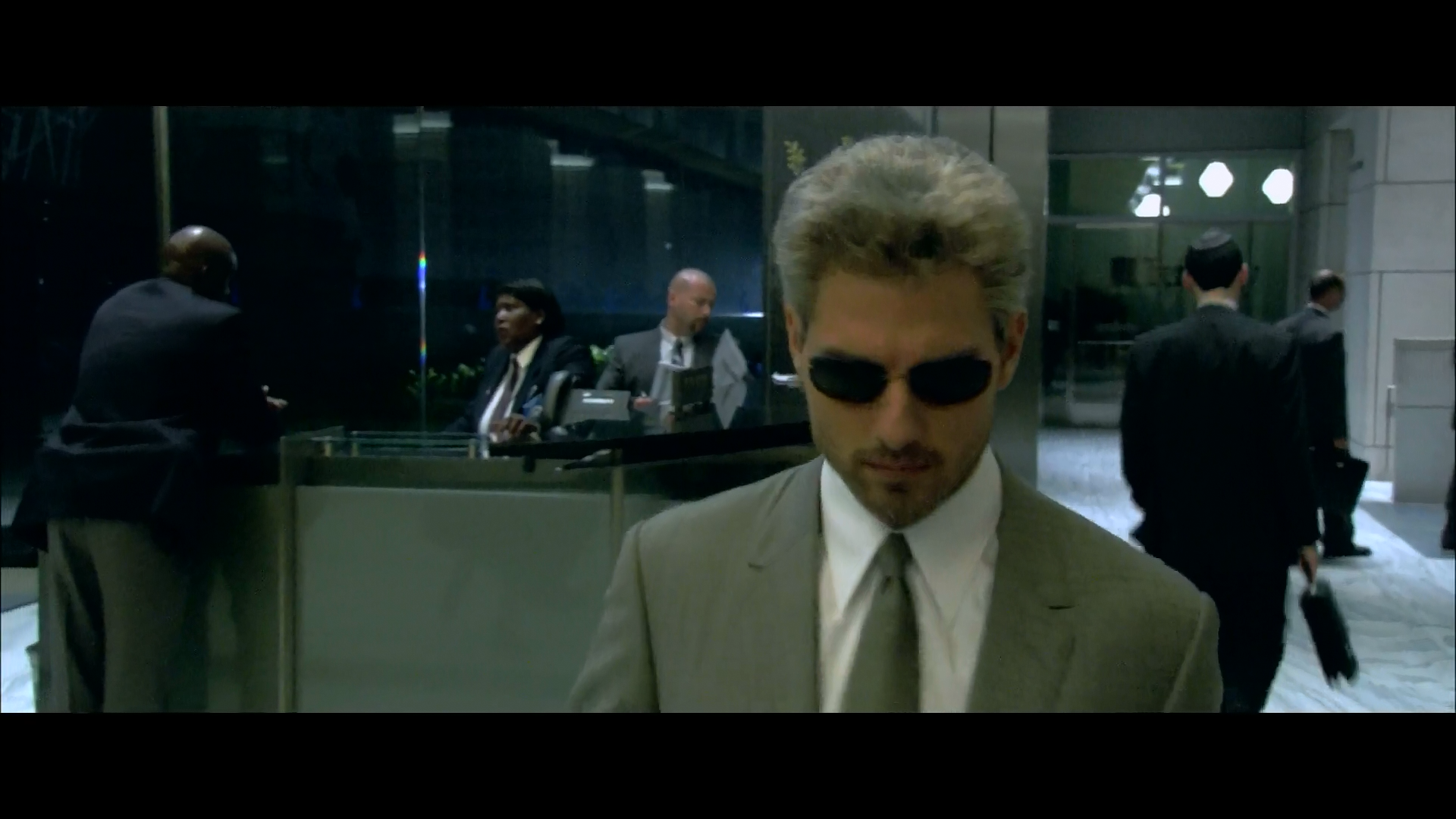 In a scene before the climax in Mami Vice, Sonny and Ricardo are in a white hangar with other detectives preparing for the final showdown with the criminals, and they drive to the location in a white car. They are no longer undercover, they are now openly acting as enforcers of the law.

In Public Enemies, Dillinger wears a white shirt in the climax as he tries to blend in with the crowd.

In Blackhat, military officer Chen of China’s cyber warfare unit is being driven in a white car.

As a prison inmate, Hathaway wears white and gray clothes, surrounded by the prison’s gray walls.

When Lien pretends to be a corporate lady, she’s wearing a white dress.

In the end, Hathaway wears white and gray again as he wants to hide among the mainstream population.

In Thief, Frank and his partners wear black welding gear during the film’s main safe-cracking scene. 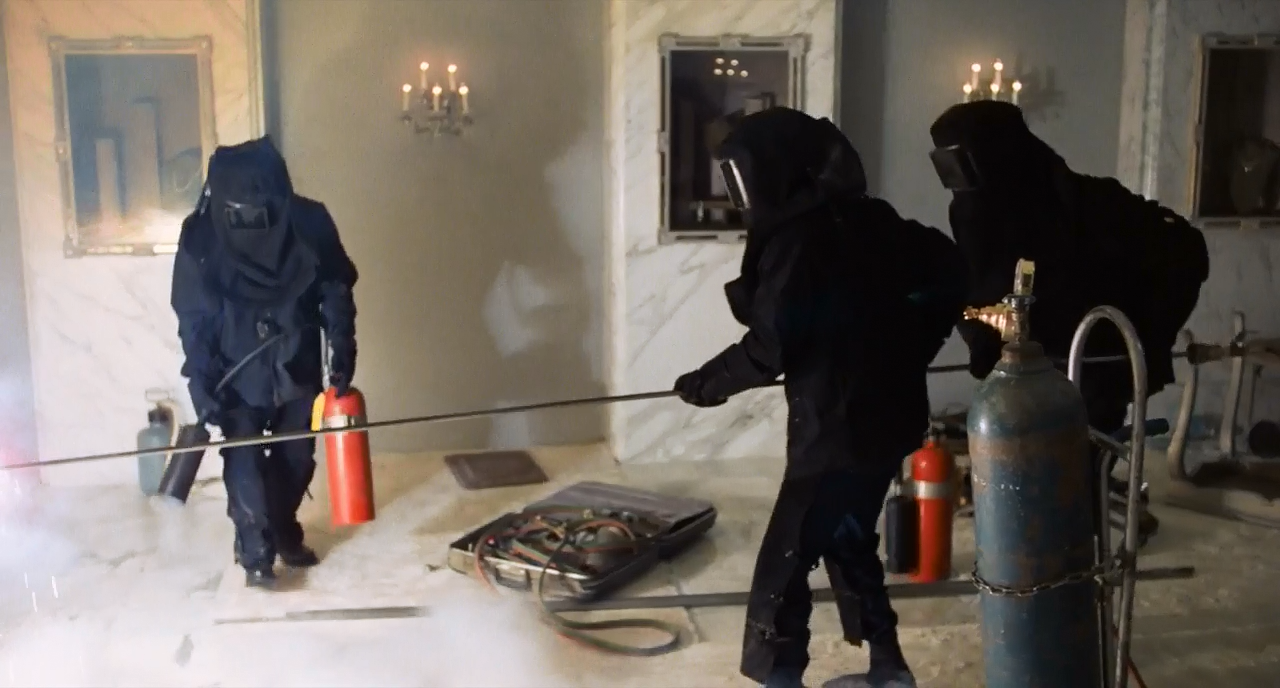 And Frank wears black when he decides to let go of his family so that he won’t have anything to lose anymore. 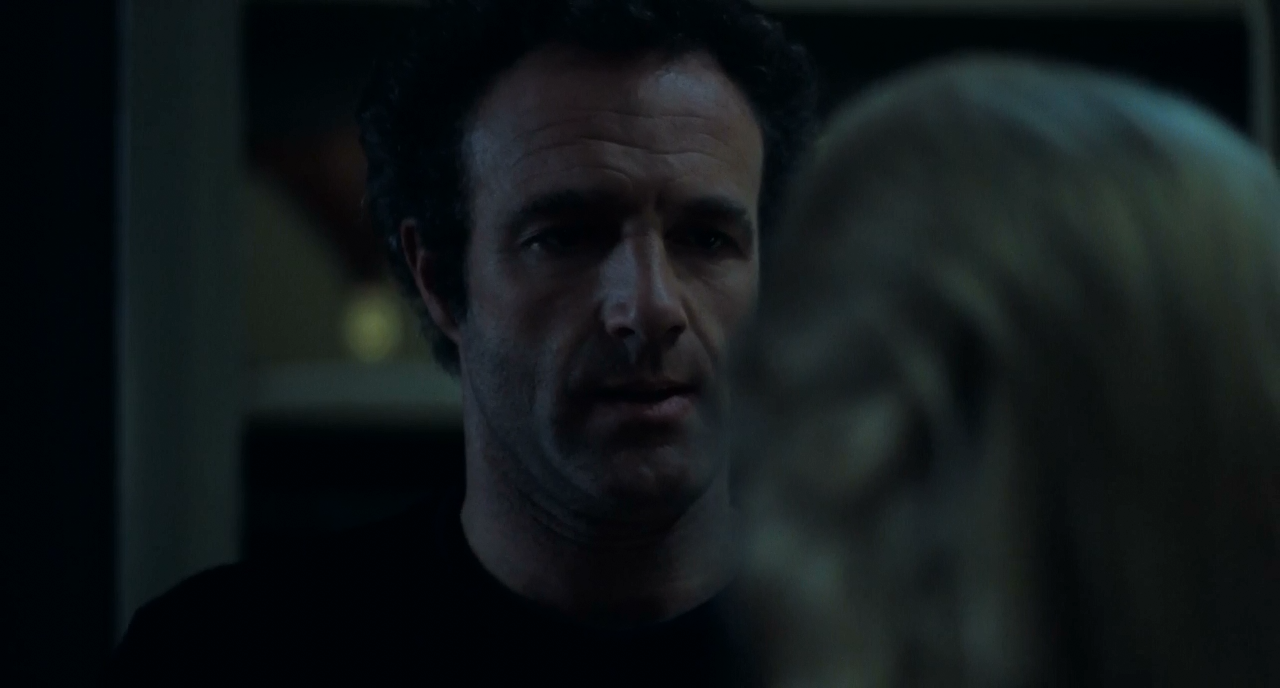 In Manhunter, Will wears black every time he gets inside the killer’s head, something he said he wouldn’t do again.

In Heat, before Chris switches to a white car when he tries to hide from the law (as mentioned above), he drives a black car.

In Miami Vice, Sonny drives Isabella to a safe house in a black car. She’s a criminal, so by helping her get away he’s breaking the law.

In Blackhat, Hathaway wears a black shirt when he learns he’s now wanted by both the US and Chinese governments for hacking the NSA.

He also puts on a black t-shirt when preparing for the final showdown. This is no longer part of a legal process, this is personal.

In The Jericho Mile, Stiles (who gets killed after making a deal with the wrong people) often wears a red shirt and red headband. 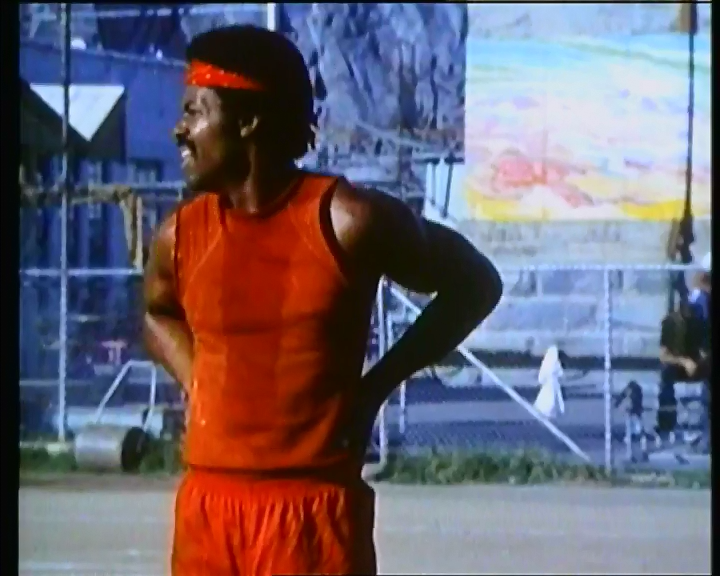 In Thief, Barry (who gets killed by Leo’s men) wears a jacket on several occasions, including when he dies. 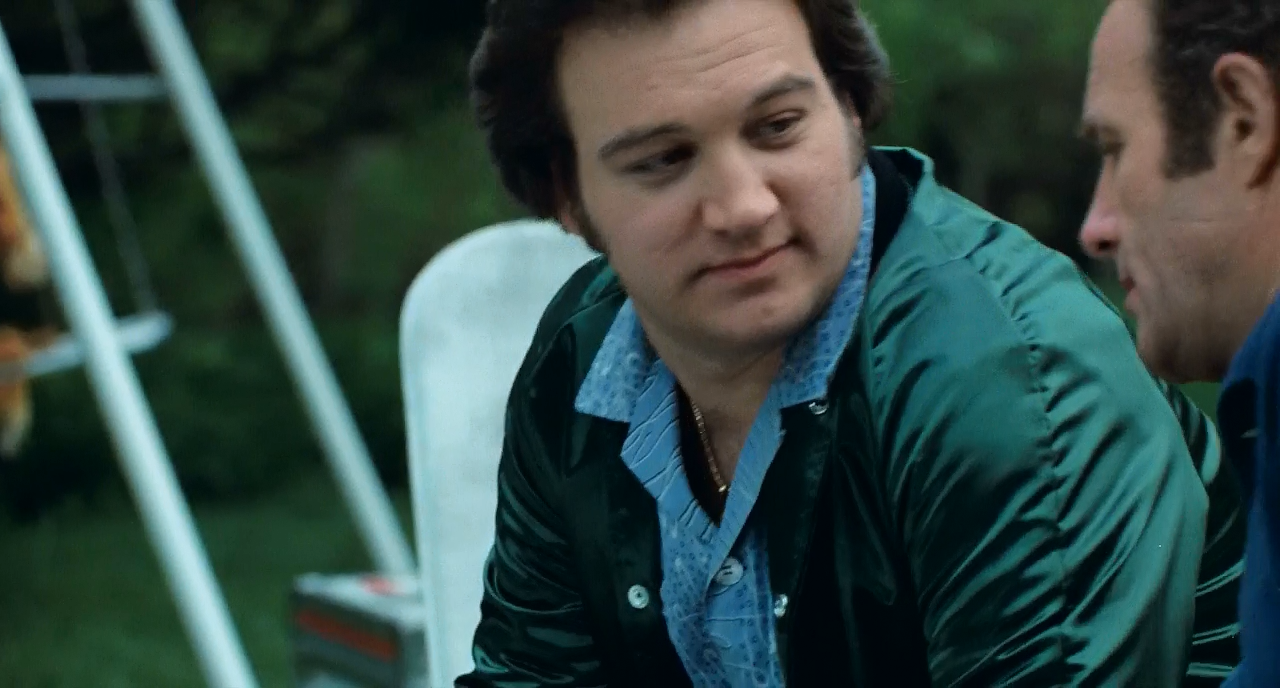 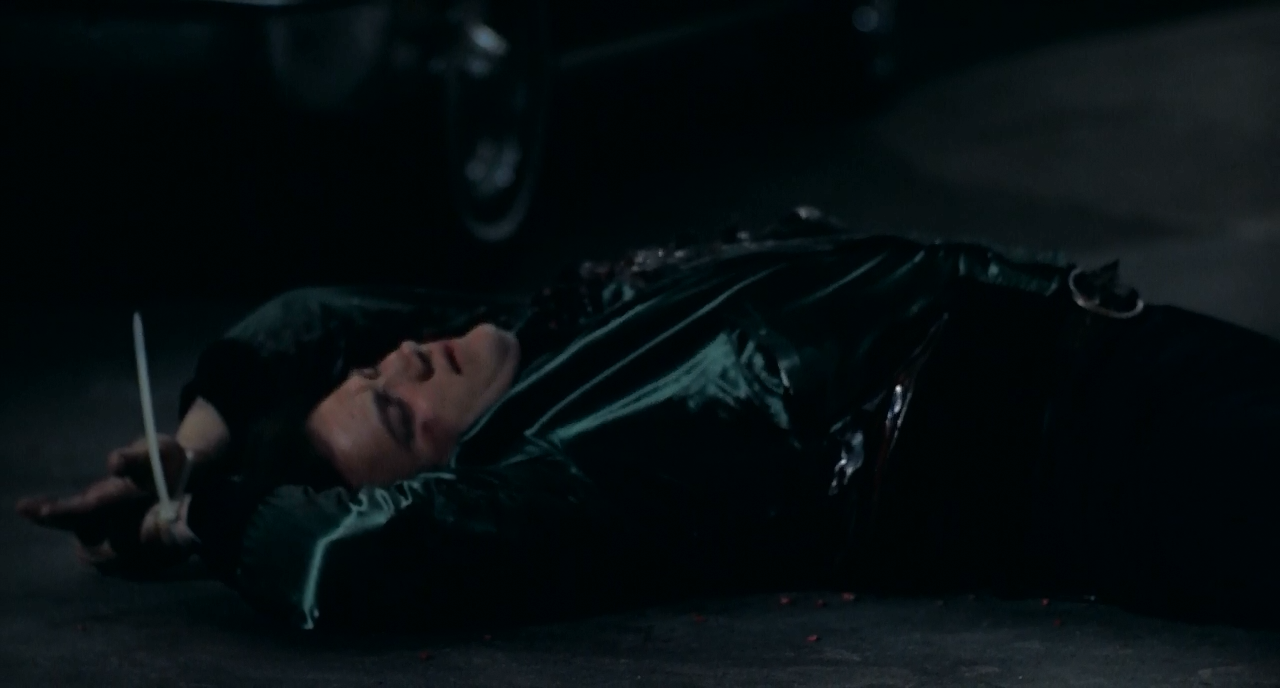 Green lights can be seen behind Frank and reflecting off the phone booth as he is accepting Leo’s deal. 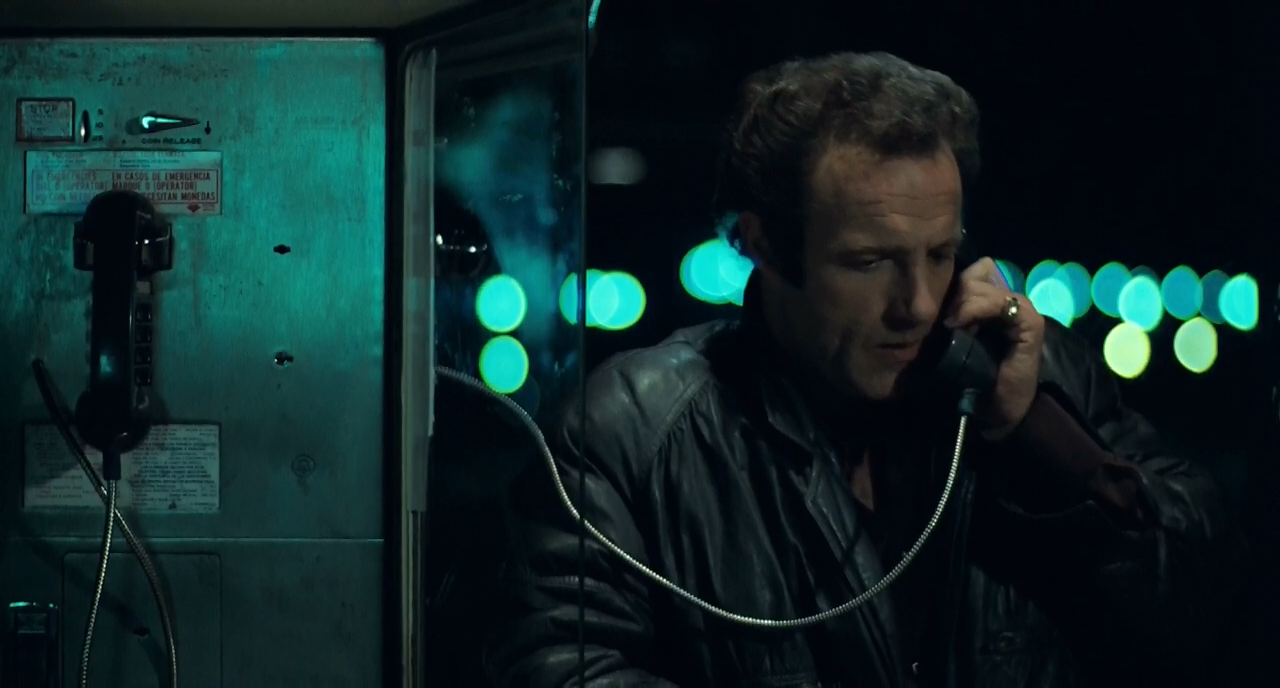 There is a greenish light piercing through the blinds of his newly bought home. 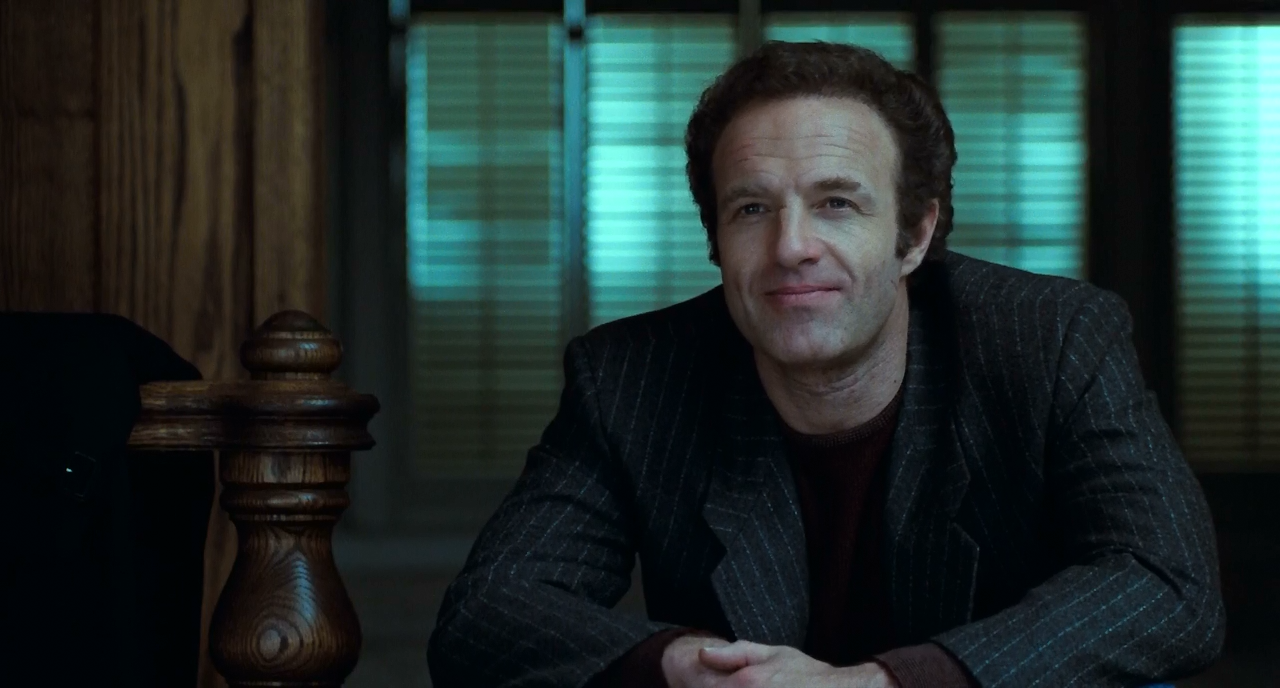 And a green lit window in the restaurant where Frank and Jessie go with their newly adopted child, the seats are red. 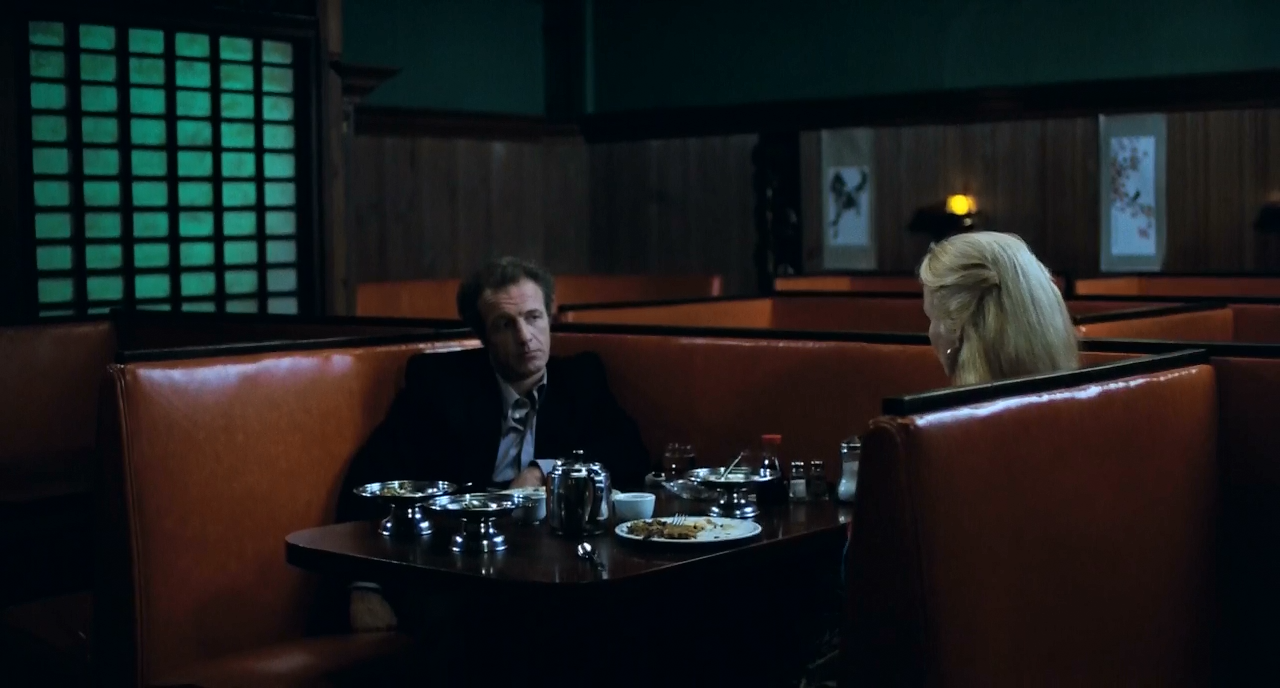 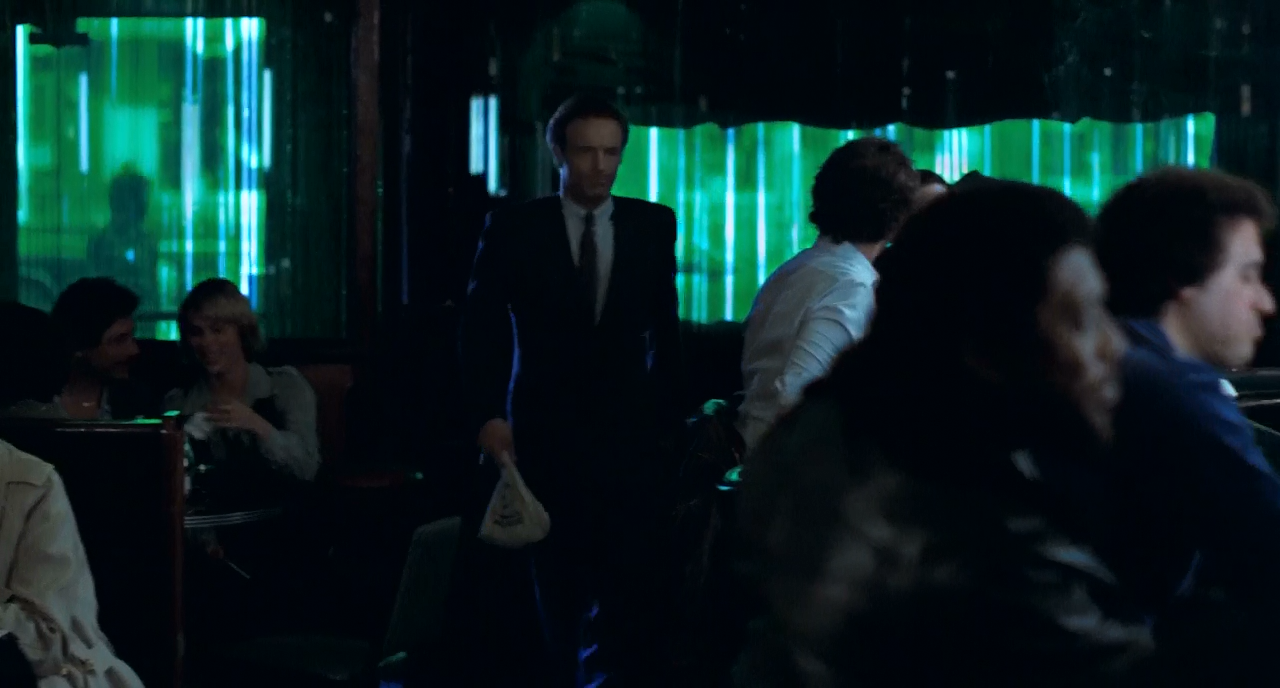 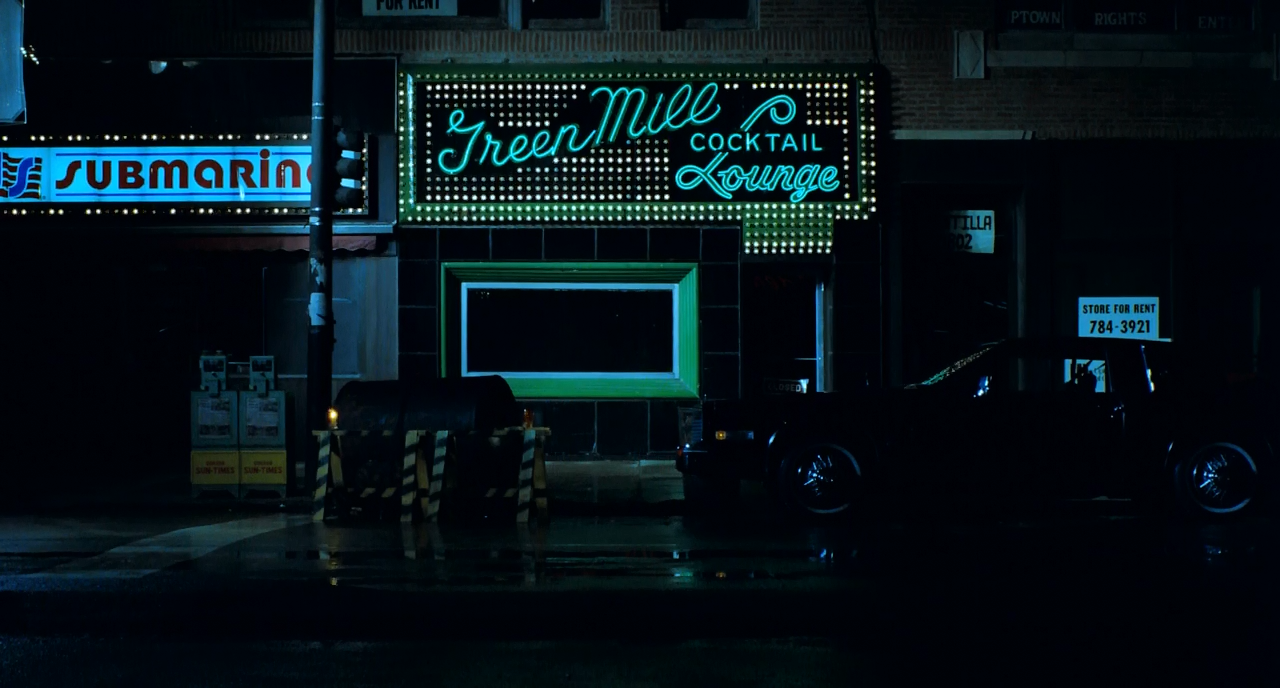 This suggests that not only the deal with Leo but also his material possessions and even his new family, are things that would ultimately cost him his freedom and independence. Something he realizes in the end when he gets rid of them, in order to get back into the mindset of having nothing to lose.

In Manhunter, green permeates police investigation rooms, either in the form of rays of light coming through window blinds or wall paint.

They are chasing a particularly dangerous and unpredictable killer and the investigation is jeopardizing Will’s psychological and physical well being.

When the police sets a trap for Dollarhyde, Will is seen through a sniper’s green tinted night vision scope.

And buildings are lit by a greenish light, attesting to the grave danger Will is facing.

The dark room of the film lab Dollarhyde works at is bathed in green light.

Green and reddish orange are omnipresent in Dollarhyde’s house.

In The Last of the Mohicans, Uncas gets killed while he’s wearing green.

In Heat, a green mural can be seen when Waingrow first appears.

A green truck is used during the armored van heist.

Waingrow kills a prostitute in a hotel room filled with a reddish light.

And he goes to a red lit bar after the murder.

In The Insider, Wigand is surrounded by a green light when he’s practicing at the golf course and realizes he’s being followed.

He is submerged in green light again when he’s in his backyard on the lookout for trespassers.

When Wigand and his family receive a death threat, the text is displayed with a red background.

In the scene where Wigand is sitting in his hotel room, completely devastated, while Bergman is trying to reach him, the hotel room walls are green.

In Ali, a green light reflects off Ali’s face while he’s talking to the media, speaking against the Vietnam war and criticizing the white establishment. By refusing to be drafted into the army, he risked both his career and his freedom.

The room where the press conference for the Ali vs Foreman fight takes place has green walls.

And the gym where both fighters train has a green tint.

This is a very dangerous fight with a lot at stake.

In Collateral, the interior of the cab is filled with green light with a red light in the background when Vincent offers to pay Max to drive all night, betraying his malevolent intent. 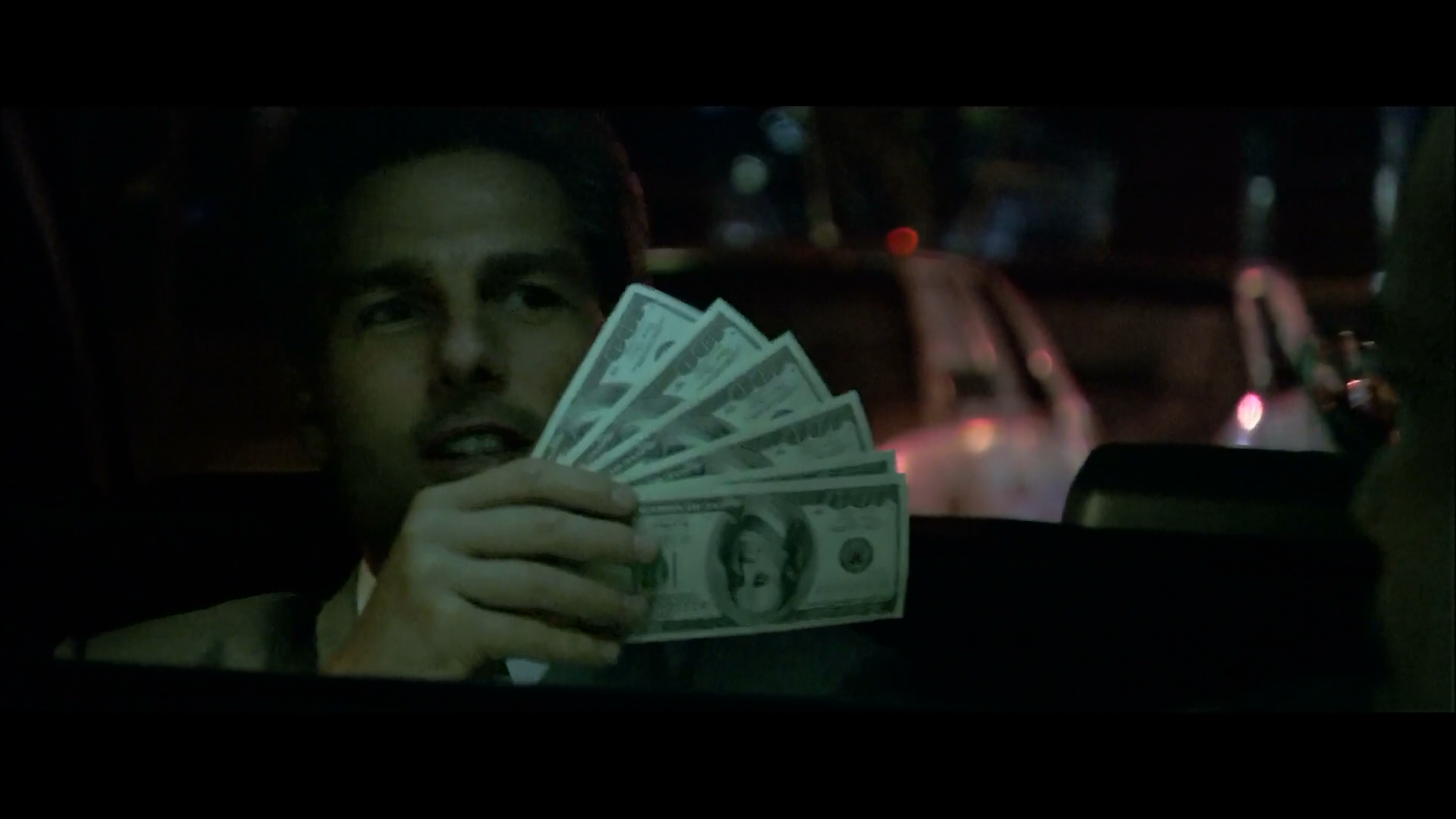 There’s a shot of the green lit kitchen of the jazz club shortly before Vincent kills the musician. 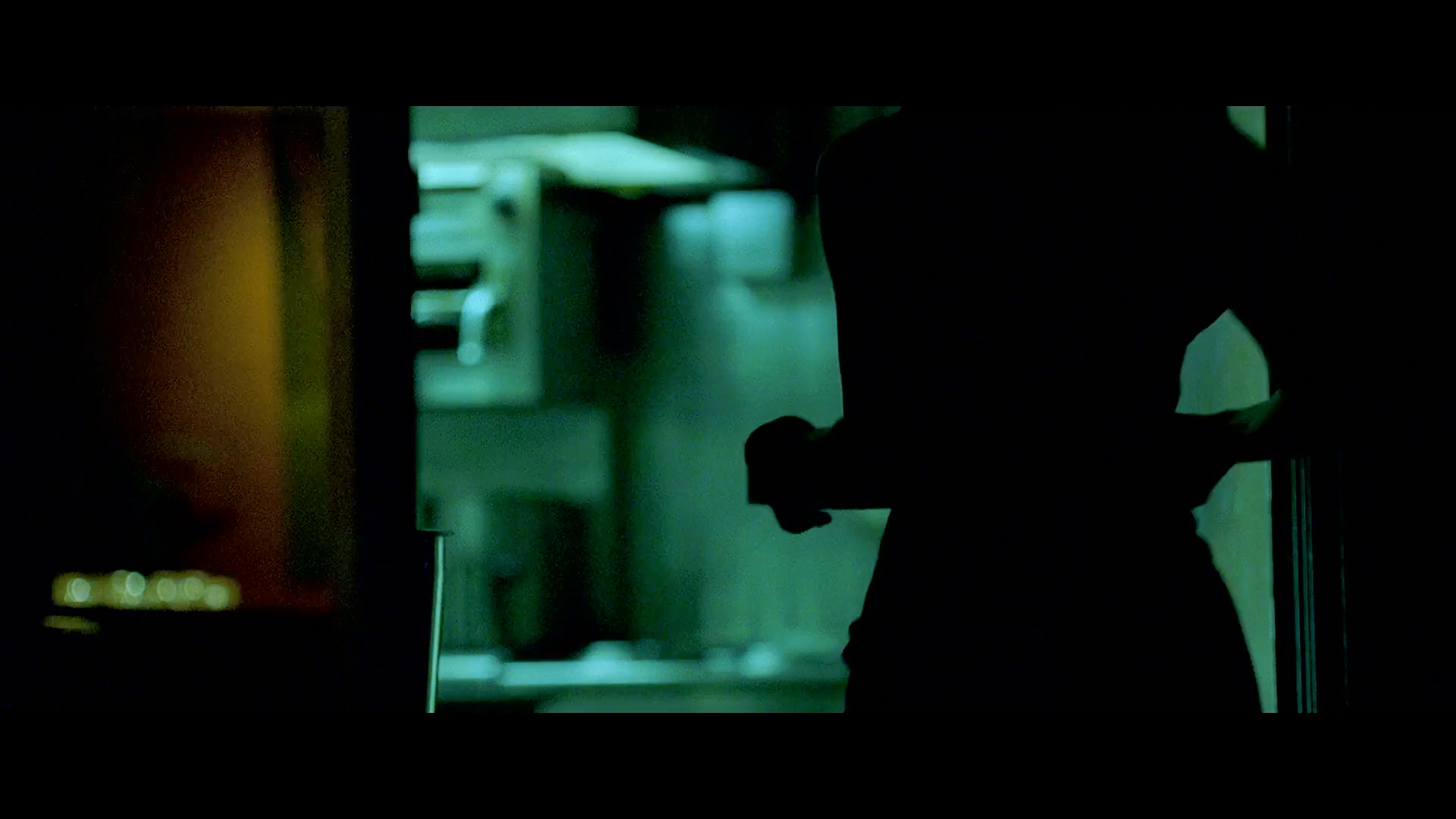 And a greenish light at the Korean club where all hell breaks loose. 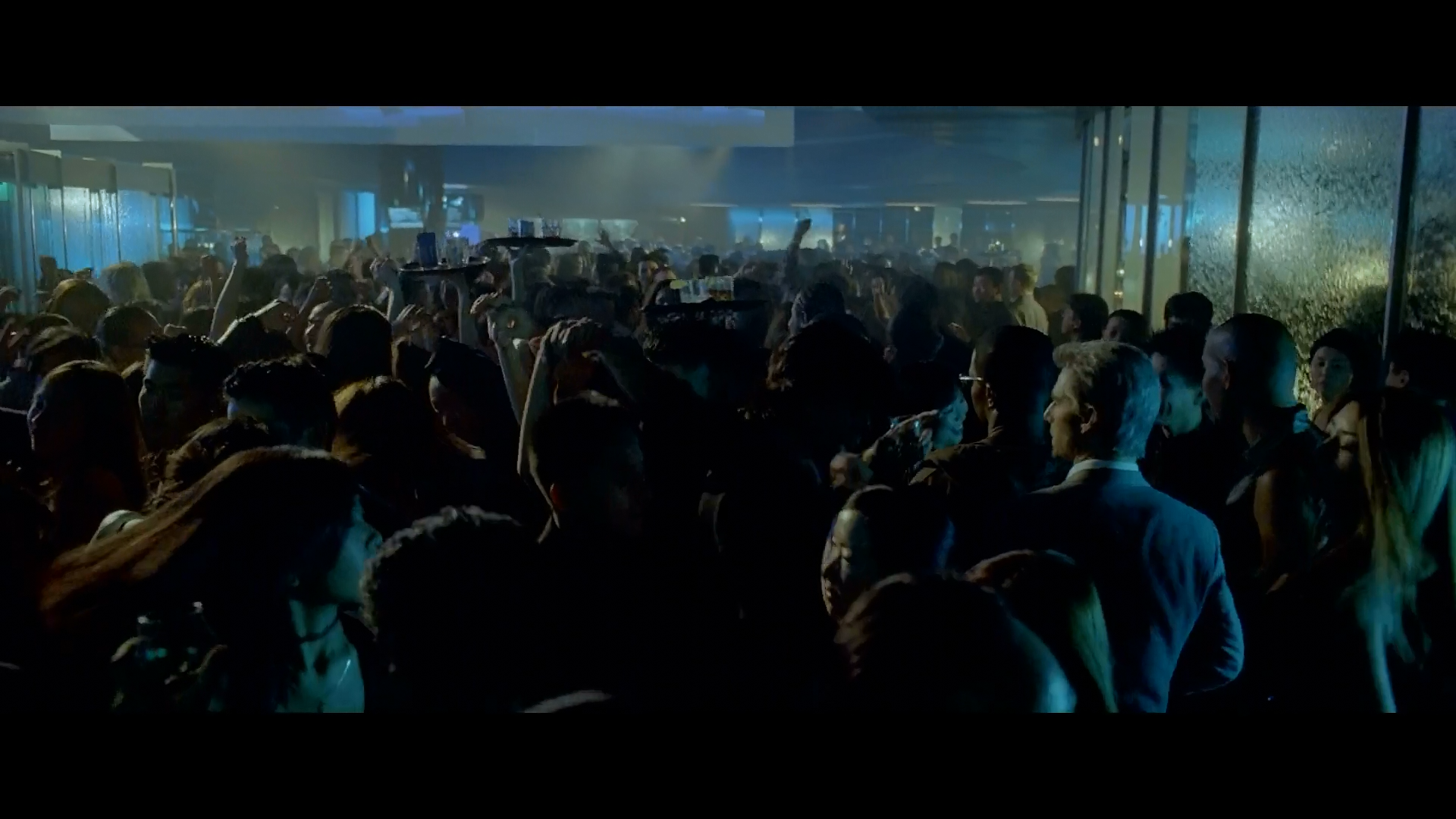 In Public Enemies, a green light welcomes Dillinger as he walks into the offices of the Dillinger squad, an incredibly dangerous move.

Blackhat opens with a shot of the earth surrounded by a green web representing global communication networks, a dangerous system, as the film illustrates.

Hathaway and Lien go to a restaurant filled with green and red lights, where Hathaway realizes they are being observed and they walked into a trap.

They later escape from killers through the subway, which has green walls.

The color scheme in the blackhat hacker’s lair is dominated by the green of the plants and the red painted columns and furniture.

Hathaway wears a green jacket during the final showdown where the odds are against him.

The showdown takes place at a traditional festival where the dominant color is the red of the festival goers’ headbands.

Blue symbolizes authenticity, idealism, love, the essence of the character.

In The Jericho Mile, Murphy often wears a blue shirt and a blue headband, his cell is filled with an intense blue light. 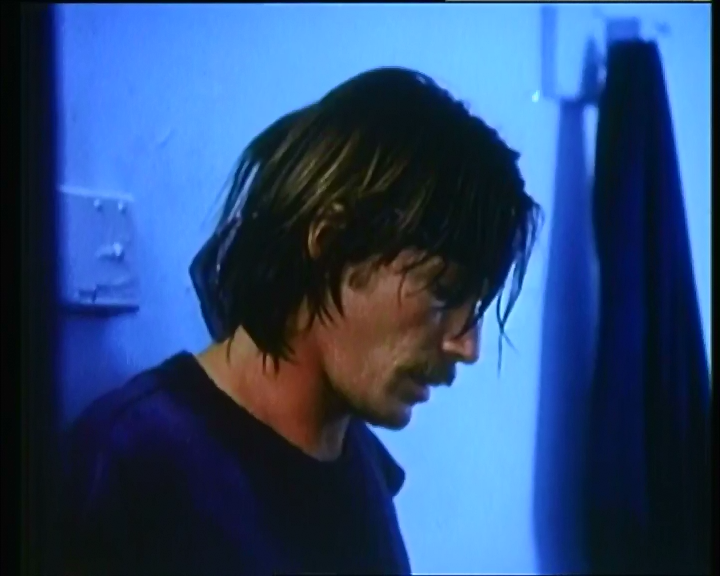 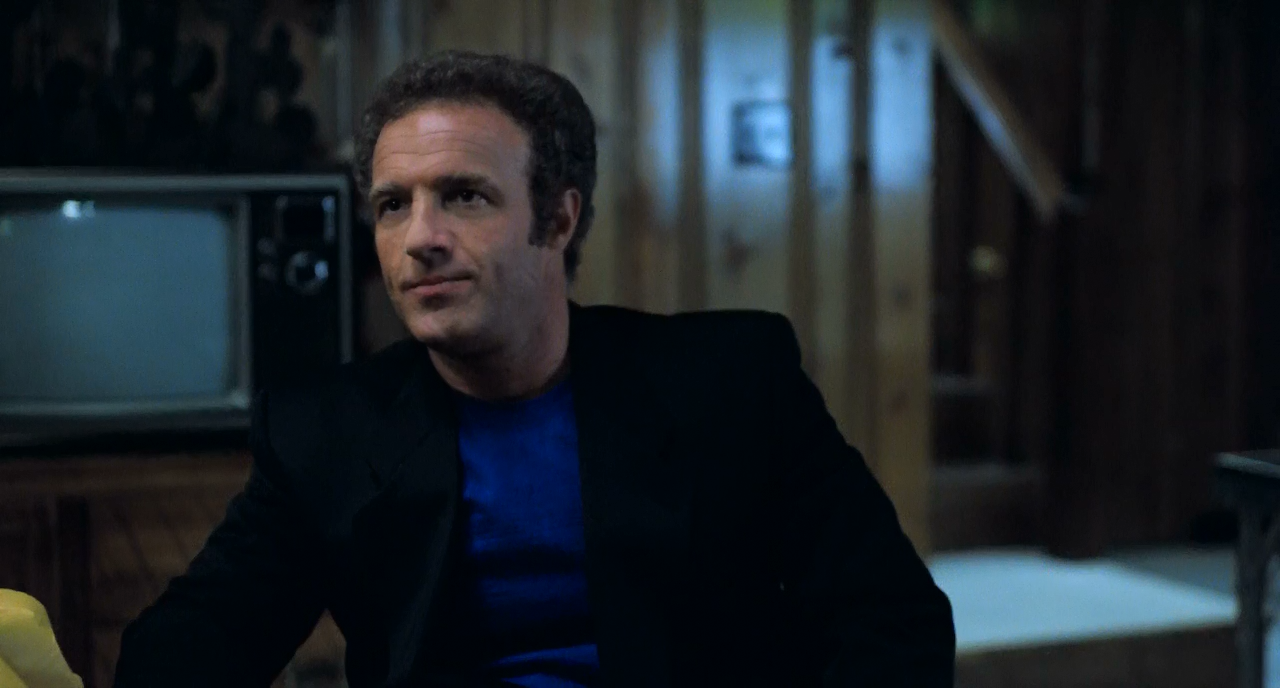 The first time we see Jessie, Frank compliments her on her blue sweater. 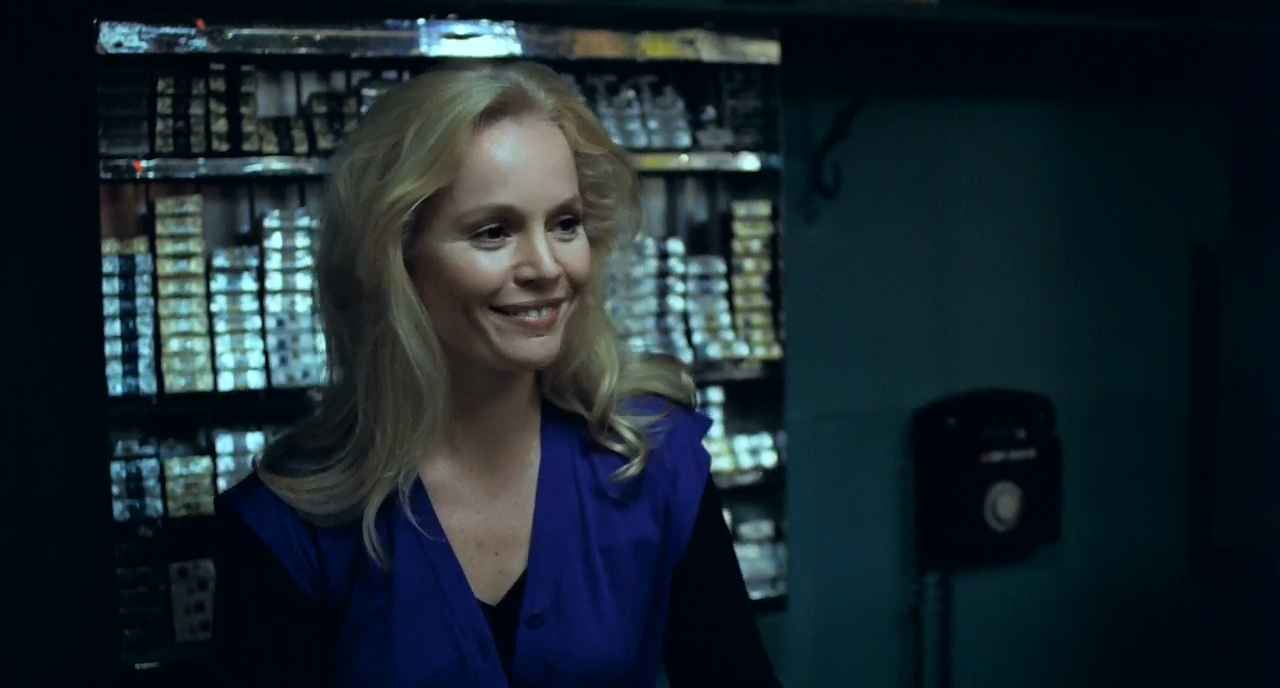 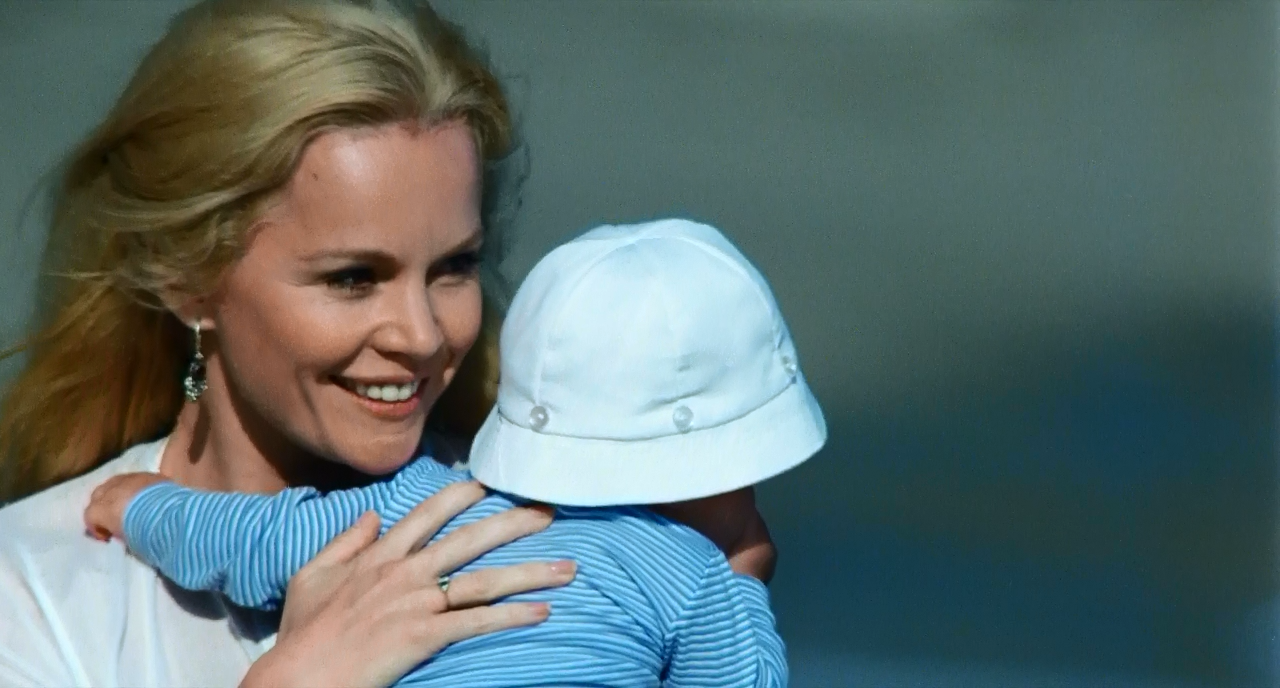 In Manhunter, an early scene has Will and Molly talking in bed at night in a room overlooking the ocean, bathed in blue light.

Will wears a blue tie over a green shirt for much of the film, suggesting an internal conflict between the damaging effects of visualizing the disturbing fantasies of serial killers and his authentic self.

The blue wins in the end, as he wears a blue shirt in the closing scene after having killed Dollarhyde along with his inner demons.

In The Last of the Mohicans, Chingachgook who kills Magua in the end and avenges the death of his son Uncas, wears blue.

In Heat, another scene totally submerged in blue as Neil watches the ocean in a quiet moment of introspection.

The sequence where Neil drives through a tunnel with white lights has already been mentioned, but the bright white lights are followed by a blue light which is soft and diffused. This is the turning point where Neil changes his mind and decides to kill Waingrow to avenge his dead friends, remaining true to himself.

Once in Waingrow’s hotel, Neil switches from a white shirt to a blue shirt, completing the white-to-blue transition.

In the Insider, Wigand wears blue in many scenes, his two in-depth discussions with Bergman being among the most significant ones.

Also for his first day as a teacher, a job that makes him feel genuinely fulfilled, unlike his previous one.

In Ali, the scene where Ali meets his first wife Sonji has an intense blue hue.

Later we see Ali inside a car through a blue tinted windshield when he’s mourning the death of his friend Malcolm X.

In Collateral, Max is surrounded by a blue light during a pivotal moment: meeting drug lord Felix and surviving by channeling his inner Vincent.

In Miami Vice, the dark blue sky is the backdrop for Sonny and Isabella’s first intimate moment.

A blue lit scene during a race against time to save Trudy.

Ricardo wears a blue sweater When he talks with Sonny before the final showdown, discussing Sonny’s relationship with Isabella.

In Public Enemies, Dillinger wears a blue shirt when he’s preparing what is supposed to be his last robbery. He’s planning to retire after that and go “a lot farther than Cuba”, in search of freedom and independence.

In Blackhat, Hathaway wears a blue shirt when he is released from prison and sees the horizon for the first time in years.

He is immersed in blue light as he walks through a company’s computer servers, he is back in his element.

A blue light fills the room when Hathaway and Lien are in bed after they made love.

Inspired by, and expanding upon : http://archive.filmdeculte.com/coupdeprojo/michaelmann_couleurs.php

Thanks for sharing it

Very informative and accurate. It's hard, even for a very careful observer, to notice all these details.

The Unbearable Weight of Massive Talent -...